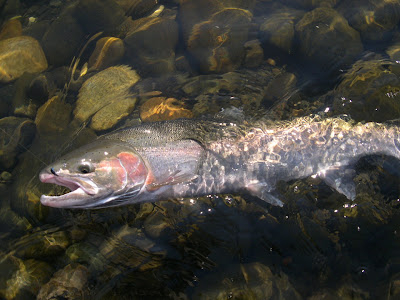 So, after being skunked for several days, I began to explore water lower down the river. On Sunday I rose late and drove into town for breakfast. My body hurt all over and I had a craving for real food, not granola bars. Driving back, I got onto a new run at 10:30 am. This is a run that fishes best from the other side, but I was unwilling to try to find the right place to wade across while fishing alone. Miracle of miracles, the run which must have been full of anglers at first light, was completely open. I started high and worked down. A downstream wind allowed me to cast a snake-roll over 110 feet consistently. Presently I got to a point where the water deepened a slight bit and slowed. It began to feel real fishy. Just the 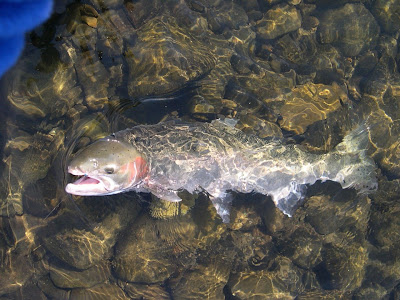 n, I received a slight pluck at my fly. The sort of pluck that big fish sometimes give. I backed up a step, and made several casts. Nothing. Stepping down, a few casts later I had another subtle pluck. Now I was really feeling spooky. All alone in a big run, and getting just toyed with. It was like the scene in Jaws when Quint has his shark bait-casting rod and line out, and the director foreshadows what is about to happen by making the reel click once…then twice….then click a few times more….slowly.
Time slowed down for me. Something big was about to happen. Then the wind shifted upstream. Shit. I ducked out of a nice double spey and swung the fly with confidence, expectation and fear all rolled into one. Pluck…. I dropped line, and felt the weight of a fish. I then raised my rod tip to the inside and gently set the hook. The fish took out a bit of line and backing with a steadiness that was unsettling. It never went for a run, but just submarined wherever it wanted to. It dawned on me that I might have hooked a monster. “Call me Ishmael” I whispered. The fish came in fairly easily, and I was able to just reel it in until it got about 30 feet away and saw me. That’s when I knew I was in trouble. Once again, without any heroics or posturing, the fish simply pulled out all my line and slowly ran me into my backing. I got nearer to shore and followed. Once again the fish swam forward, and as it did so, a woman’s voice came from behind me, “You are so lucky, what a nice fish. It looks like around 27 inches” I kind of 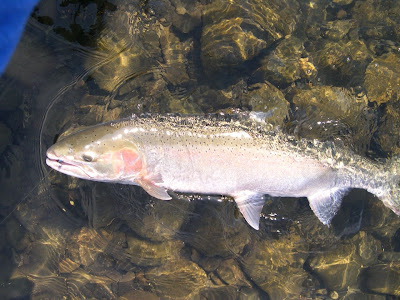 wondered if she and I were talking about the same fish here, because as it splashed and ran, I got my first glimpse of it. “I need a bigger rod,” I thought. The woman wanted to know if she and her friend could fish behind me. I agreed politely, back bent to the strain. For 45 minutes the fish dogged me. I didn’t want to break it off, and had to constantly remind myself to concentrate, placing just enough stress on the line and steering (or attempting to steer) the fish where I wanted him, or at least preventing him from running where I didn’t want him to go. For 45 minutes he lead me downstream 300 yards. My arms cramped. I began using the butt of the rod against my hip as a lever. I became dehydrated. Still, the fish wouldn’t come in enough for me to raise his head or turn him. “Have patience Erik” I told myself. “You have all the time in the world.”
Finally, I was able to turn the fish. By now, both the steelhead and I were staggering like punch-drunk fighters. I was blown away at the size of the hatchery buck. I picked it up to show the women far upstream the size, but they were busy falling into the river. This fish was simply huge. Measured against my 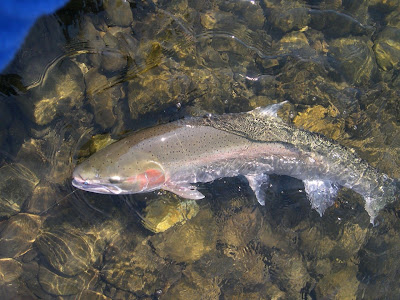 rod, it came to 37 to 38 inches, but it’s girth was the amazing part. It must have been dining on steroid fish because I could hardly get my hand around it’s tail to lift him. He was the size of a king salmon. I had done it. Alone. Around 20 pounds of power. On a size 4 sparsely tied Autumn Twilight.

Totally destroyed and elated, I went back to camp, drank 32 ounces of Gatorade and had a mirror pond. If for no other memory, this fish made the trip.