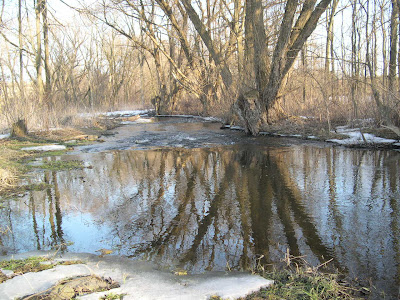 I just had to get out. There is a point in our winters in the Minnesota north woods when serious dementia can take hold, despite our best efforts. Call it cabin fever, seasonal affective disorder, or winter blues; it is what drives Alaskans and others in desolate climates barking mad each and every year.

I was suffering from writers block, or more appropriately, composer’s block. Having completed a commission for a short piano concerto, all that was left was to write the cadenza. How one runs a metaphorical marathon of inspiration, only to come up short, unable to continue and within sight of the finish line, is beyond me to explain, but here I was.

I sat for days at the piano scribbling notes and crossing them out. I listened to recordings. I cooked, cleaned, wrote poetry, reorganized the sock drawer; all to no avail. If something didn’t happen soon, I was going to run up against the deadline, and the regional symphony would have no holiday showpiece. As I stared out the frosted window while sipping hot cocoa I knew I needed a change of pace.
I expect everyone has a special little place they go to get back in touch with the voice of their soul. For me, that place was a creek that ran though the woods not a mile from my cabin.

It was December 15th, so I had little expectations other than the possibility of a bit of open water in the riffles. I grabbed my knocking-around rod, an old South Bend cane with a bit of an actual southerly bend, donned my parka and snowshoes, and with a single box of tattered flies, set out for the stream. If nothing else, the fresh air and exercise would help to clear the cobwebs from my head.

The world was painted with a deep and soft background of white intersected by brown, black, and gray vertical lines. Dark and moody clouds loomed overhead. I took the path through the woods, and noticed that a hare and a skunk had preceded me. Chickadees and cardinals imparted motion to the sleepy landscape as I trudged forward. I still had no real idea what I was going to fish for on the frozen creek, escape, trout, inspiration, or perhaps just solace.

Arriving by the little riffle, I was delighted to find a twenty-foot pool of open water. I cleared the snow from my snowshoes, and began rigging the rod when the clouds parted and the sun shown forth in all its glory. Tying on a dark nymph with a slightly rusted hook, I crept slowly to the edge of the pool and peered in, letting my eyes become accustomed to the sun and the water.

Then I saw it. There was a flash of silver in the very center of the pool. There was a brook trout down there, moving from side to side and examining his upside-down world.

I tossed the fly to the top of the pool and slowed its travel to sink it. The fish immediately flashed on the nymph. At the very moment I struck and missed, strange sounds started to issue from the bushes and branches surrounding the stream. They began slowly, almost tentatively, and then grew steadily. I was at a complete loss. What was this?

Then it dawned on me. The forest was alive with the sounds of melting snow and the formation of icicles. It made sense now. The temperature according to my window thermometer at the cabin was 12 degrees Fahrenheit. The sun was heating the branches and melting the snow, which in turn, froze into icicles. Then the icicles began to crack. Snow fell from the uppermost branches of trees, and unloosed the ice, which tinkled onto the frozen surface of the stream. The limbs above began to groan in low notes.

Suddenly I had it. Here it was: nature’s own music and rhythm. The perfection of snow and ice and winter sun playing on their own instruments a delicate ode to the end of the year. I quickly found the stub of a pencil and began recording on the back of my fishing notebook the chords and melodies that were playing before me. The little fish could wait.