The author & the beginning Hello blogland! This is Erik Helm...

I have been thinking of starting this type of blog for some time now, but my book project and other things just kept getting in the way. I just needed the time and inspiration, and following this August's mini spey clave on the lovely (stinky at this time of year) Milwaukee river, I decided to take a day and pop this thing out. I am a writer, so I will try to keep things on topic rather than philosophically wander from time and place. (me...wander...?)

Essentially this is a blog about flyfishing. In specific, my love of steelhead fishing with a two-handed rod, the beautiful equipment and flies, and last but not least the beautiful settings that steelhead like to live in. (We will ignore the Capitol drive bridge here or any other ghetto-caster setting, shopping carts anyone?)

Nothing touches me like casting a long line and swinging a hand tied fly in these settings. It also helps when you catch something....


I started fly fishing late in life. I fished with my father when young. He hand crafted beautiful spinning rods with walnut inserts and intricate wrappings, but rarely fished much. He taught me to spin-fish. Fast forward to the year 1999. I took my parents to Kletch park on the Milwaukee river. My mother, an artist, would paint, while Dad and I shot my wooden Medieval crossbow at the archery range. When we were ready to leave, I wondered what all the commotion was at the little waterfall on the river. Going over to look, I witnessed dozens of fishermen flailing away. What they were chasing became suddenly apparent when a huge fish dramatically and gracefully leapt the waterfall. If I could be a time-traveler I might go back to this day and prevent myself from ever seeing the steelhead; an interference that certainly would have made my life more normal and less filled with wader-rash, hypothermia, twisted knees, etc.
However, given the choice, I guess I would choose again to live outside the commonplace. I would choose the life of living in squalid camps in pristine wilderness eating cold soup out of a can; choose the endless casting and wading in the seemingly futile hope that sooner or later, if I truly believe, a steelhead will eat my fly, and the fish-gods will be good to me.

I built a flyrod and began to explore the Milwaukee river. I fished for both steelhead and salmon. After the first year of standing around the several falls areas with all the other morons 'fishing' in situations which could be best described as 'shooting fish in a barrel' while surrounded by the mentally challenged, I began to go off and explore on my own. My self-taught casting skills were less than pathetic, but my desire and passion more than made up for it. I 'caught' some salmon on flies, and even tried to eat one. (Mmmm, rubbery....)

Then one fall day I met a fellow angler who was casting so beautifully and far that I just stopped to watch in awe. That was Rob Estlund, a spey pioneer and soon to be good friend and fishing partner. I started out our friendship by low-holing him. He should have killed me, but instead we spent several hours talking. He told me about a run farther up the Milwaukee that had been fishing good.

The next day, there I was in the run, making my way down the river with my 8 weight single hander swinging wooly buggers with enough slack and squiggles in my line to cause Harry Lemire to die of laughter. Around three quarters down the huge (really small) run something smashed my fly with a suddenness and primal power that to this day I can still feel in my arm. After several blazing runs which the fish blasted out of the water, ran me into my backing, charged me and did everything it could to become unhooked while I haplessly did everything wrong, I finally landed a pure chrome 35" hen steelhead.
I thought at the time that I had hooked the fish, but alas, it was the other way around; the steelhead had hooked me.....

Thus began an odyssey that would take me to the pacific northwest, see me run a flyshop, fill my apartment with dead animal parts, and cause concern by relatives and friends. 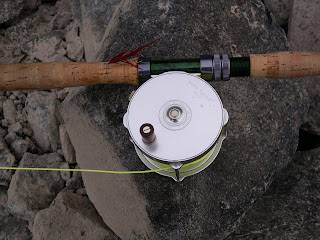