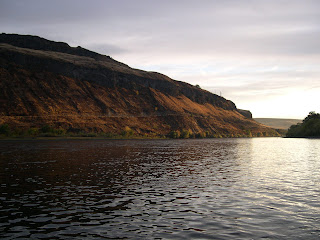 One element beyond all others will hamper your ability to fly fish; The inability to place the fly wherever it is needed, both near and far.
I am a fairly accomplished caster, but it had come with an incredible amount of work, shoulder pain, frustration, and analysis. I just did not want to be the guy on the water that was embarrassed by my casting.
So, I practiced, and practiced.... and practiced some more. It was slow work. The first year I went out west I had a double spey and a mess of a snap-t. The second year I had a single (wretch!) , double, and snap-t. The next year was the year of the tailing or collision loop. My casting was much better, but my timing and power ratio was all FUBAR.
I thought my single handed casting was good until I saw Bob Nasby cast at our Jamboree. Right then and there I realized that I was just a big strong guy, and was using no finesse. So, I went out and practiced and fished, fished and practiced, and by 2007 finally reaped the fruits of my labor.
Self critique is essential for the autodidact. When one is learning by oneself, then the question 'why' should always be on your mind. "Why is this happening, and what will happen if I do this"?

I paid for all the practice by having to answer endless stupid questions from people on shore "Catching anything?", "Why do you need two rods?", "What 'cha fishin' for?",. People would just not believe that I was practicing my casting. When I told them that I was just practicing, they gave me a sly, knowing smile as if to say "Well, buddy, you ain't gonna catch nothin on that there flypole nohow!"
What I endured....
What always amazed me about fly fishermen is that the same guy that comes to a casting clinic flailing away like a drunk, will go out twice a week to hit the putting green and driving range. Perhaps he is afraid of being laughed off of the links? Maybe we should begin laughing at bad casters on the river so they get embarrassed enough to practice? I for one will always try to be helpful, as I am not so far removed from being that guy who couldn't cast.

Another way to become a good caster is to fish with a great caster. I fished with Rob Estlund for years, and how I managed to evade suicide or breaking my rod in frustration I will never know. Perhaps I am stoic... or just thick as a brick. Whatever the reasons, fishing with a master as he burns out 100 foot casts and delivers the fly to exactly where he wants it will make you desirous of either quitting or improving in a hurry.
So... get out there and practice. I will. I have a long way to go yet.
Posted by Erik Helm at 4:42 PM