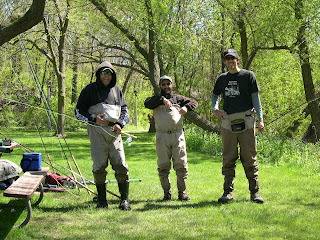 These three guys are authentic rebels.


As I write this the streets of Milwaukee are filled with roaring Harleys driven by American 'Rebels' for their 105th anniversary of noise. You know, the guys and gals that buy the consumer culture of HOG biker in order to establish their identity and individuality by looking and acting like everyone else. Rebels, right.

Steelheaders are real rebels. We live on the fringe of society pursuing with passion a life that no one else can remotely relate to. ("Tell me again why you don't eat them fish..")
We dress like geeks, get dreamy at the mention of a river, spend our life-savings on rods, and don't give a fiddler's fart what anyone thinks of us. Going one's own way in the face of convention defines a rebel. Bugger off with convention!

On the other hand, many steelheaders are beginning to dress and talk alike, "Sweet stick dude." "You rolled bad-ass fish karma." We wear the same ballcaps with flies stuck to them, and wear polypropylene on Sundays. We try to fit in. "Have you seen that hat that Mike Kinney was wearing, Man I gotta get me one of those."

We had better watch it, or our rebel status might turn into sub-culture. If it does, at least we won't make as much noise as Harleys do. That is unless we partake in the burrito bar at Huntingtons.
Posted by Erik Helm at 5:23 PM