Of flies and art 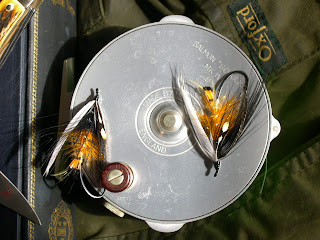 I enjoy the aesthetics of fly fishing. A tight loop and elegant cast are like ballet to me, but perhaps the aspect I most enjoy about swinging flies for steelhead are the beautiful flies that we use. Catching a fish on an ugly fly is an insult to the fish. That does not mean that all the flies we use must be traditional and made from exotic feathers from the British Empire. It just means that a fly should be something to look at in itself; ie. a little piece of art.
When I started tying flies, I immediately tried to create the wonderful 19th century patterns I saw in books. Lacking in proper materials and skill, the flies caught fish, but were not something to be proud of. Then after a few months, I met a strange redneck in the flyshop. He considered himself a great tyer, and indeed some of his flies were quite good for what they were. It was just that it seemed so incongruous that this guy who seemed like 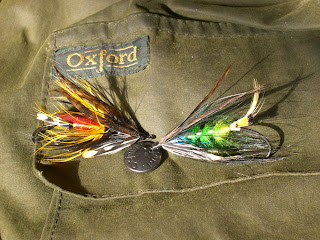 an extra in the movie Deliverance would be a fly tier. I said to myself "Erik, if that guy can do it, so can you." With that statement of intent, I began a long journey of fly tying which has seen my entire dining area turned into a miasma of colorful dead animal parts, vises, storage containers, and deer-hair shavings.
I am a good tier, but this little region of Wisconsin has quite a few better tiers. Royce Dam called on me in the flyshop once every couple of weeks to show me his latest Atlantic salmon fly creations. Like anything Royce does, they were works of art, but usually sported rather ubiquitous names such as "Leatherneck." Bob Blumreich ties some of the most exquisite traditional spey and dee patterns in the country, and Brandon Luft quickly became one of the finest tiers around. So, I will never be the best tier, but have come to accept that. I did produce two very excellent episodes 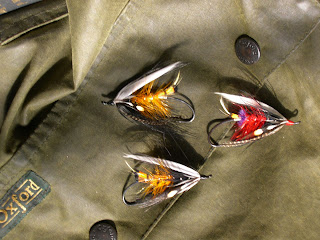 of Outdoor Wisconsin on traditional salmon and steelhead flies. It was fun, but I was so nervous that my hands shook throughout the filming.
The problem with being a tier is that one has to accept that it is art for art's sake. I probably have over a thousand steelhead flies in boxes. If I were to fish 24 hours a day for the rest of my life, I could never use them all, so some are given as presents, donated to clubs, etc. Mostly I tie them and then look at them. They end up stuck in a fishing hat like everything else.
The process of becoming a decent tier involved one simple rule; accept nothing other than the best you can do in each and every step. This involved undoing things and re-doing them again and again, but I learned from it.

I have become a true believer that the fly is the least critical component in swinging for steelhead. As John Hazel says, "They will take your car keys if they are willing." The most important factors are confidence and the right style of fly for the conditions. Confidence is essential if you are to fish a run thoroughly. You just have to believe. The right style of fly will see the angler not fishing a light wire size 8 low-water pattern in winter flows and cloudy water. Here we should choose big. So the water determines most everything in the fly choice.
I too tie and fish big ugly stuff for winter and spring flows. The bigger the tube and the more materials one crams onto it often makes a difference, even if the result looks like some mutant Christmas ornament.

So my advice to fly tiers is this: just have fun! Catching a fish on a fly you tied is a signal event in the progression of a fly fisherman. Just don't let your creations be ordinary. 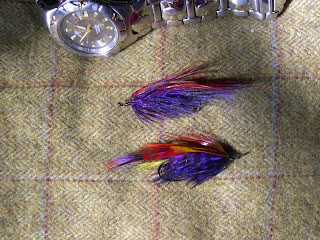 Art is in my blood, literally. My mother was an amazing painter and celebrated Wisconsin artist. (WWW.MTH-ART.com)
I never developed the drawing and painting talent that was hers from birth, so I have to express myself and find creative outlets elsewhere. Tying flies helps a lot. So does writing.
Unfortunately, for the most part artful flies are rarely appreciated properly outside the fly fishing community. On several occasions I brought a few flies to family gatherings to show what I was doing, and received inane comments such as "How is that going to make you money?", Do you eat all the fish you catch?", or "My cousin Zeke fishes too, you should talk to him, he mixes a potent stink-bait". I no longer even tell people I fly fish. It is so much easier that way. 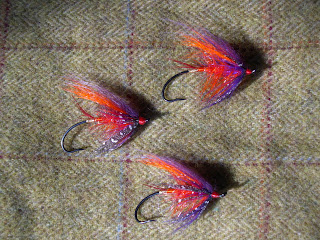