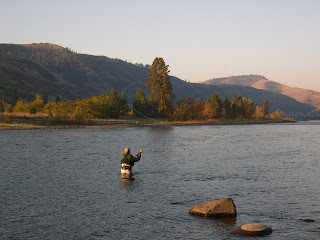 If I learned one thing from running a flyshop for several years and casting hundreds of lines and rods, it is that there is a true symbiosis when a rod is cast with the proper line.
I have seen so many students of my casting clinics come with rods that are mis-lined. They struggle until in desperation, I try their rod and discover the inherent problem; Wrong-line-itis.
Wrong-line-itis afflicts all fly fishermen at one time or another. It usually results from not seeking out the advise of someone in the know, and just buying a five weight line for a five weight rod. Each rod casts a window of grain weights. In that window, there is a sweet spot. Hit the sweet spot and you will know it. Most modern rods are so stiff and fast that over-lining them is necessary at most casting distances.
When it comes to two handed rods, things become infinitely complicated. For single handers the AFTMA has established a sort of guideline for what constitutes a five weight line. Not so with spey rods. After the spey explosion in the 1990s new manufacturers produced rods to cash in on the craze without any idea what they were doing. Some of these rods were really good, (St. Croix Imperial for example), but the rod line weights were often wildly off. I remember casting a Cortland spey rod for a customer to determine the line weight. The rod was rated at a 5/6, so I lined it with a 6/7/8 windcutter. It was like trying to cast a piece of thread with a telephone pole. What the heck? I asked the gentleman what other lines he had with him and he mentioned that he had a 9/10/11 windcutter and that Dave Pinczkowski had told him that it might be closer to the mark. "Lets try it" I said. Sure enough, the damn rod came alive and actually loaded with a line that was according to the rod manufacturer, twice as heavy as needed. Remarkable. No wonder the most common questions asked on spey forums are about what lines work on which rods.
Then there are styles of casting. Some rods set up with Scandinavian shooting heads for surf casting perform like a dead dog when using a water anchor. I have cast rods from manufacturer's reps that were lined improperly.
I always feel like I am at fault when this happens. "What the hell?" I exclaim along with worse expletives, trying forward speys over and over again and only able to obtain a loop the size of a Winnebago. Here is where a good casting friend can help you. Give the rod to him or her and let them hack with it for awhile. If the consensus is smelly, then pop that line on ebay, and try something else. The last thing you want to do is cast a mismatched rod and line all day. Talk about a royal pain in the....
I have spent quite a bit of time putzing with lines with Rob and Dave, and the experience has been absolutely invaluable to me. Accordingly, my rods cast as they should, and are a joy to use.
Posted by Erik Helm at 4:03 PM