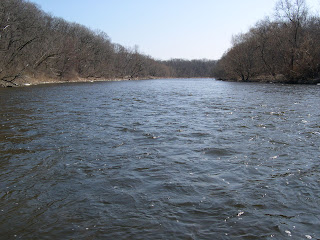 The Milwaukee is my home river. I live less than eight blocks away, and spend at least one evening a week at Hubbard Park practicing my spey casting and answering questions from curious Russian immigrants. In summer I chase Smallmouth as much as possible. In spring and fall, steelhead.

The Milwaukee is a fickle lover. She is rain dominated, so the flow really determines how you must fish, where you can wade, etc. It runs from a shallow summer norm of between 100 and 300 Cubic Feet per Second (CFS) to spring highs in excess of 7,000 CFS. What is wadeable at 300 is death at 1,500. 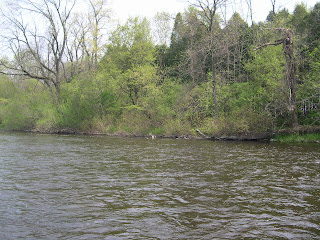 The Milwaukee can be beautiful. One can lose himself in fishing and not realize that this is an urban river. Tree-lined banks, blue herons, kingfishers, owls, hawks, waterfowl such as ducks and geese, and diverse songbirds add to the setting. Curiously, most Milwaukee residents think the river is polluted and full of poop, so they rarely venture into it.

Indeed, the Milwaukee used to be an urban cesspool. The North Avenue dam backed up the flow upstream so that the dominant species were carp and other rough fish. Downstream from the dam, anything thrown into the river stayed where it was and rotted. Diners at river walk restaurants would suddenly run for the bathroom when the wind shifted. Then in 1997, the dam was torn down. In a couple of years, the river returned with only a little help from the DNR. Silt was washed away, exposing spawning gravel, bass populations exploded, and the birds came back. The tearing down of the dam had another side-effect; it created one hell of a steelhead fishery. Those who took early advantage of it such as John Apple, Bob Blumreich, Dave Pinczkowski and Joe Solakian had the river to themselves. Not for long....

An explosion of anglers and fish greeted every fall and spring day. The trees were trimmed with colorful lures and flies. On one walk down the river I collected over 35 crank baits! These were the glory years, when anyone who had a rod and a little gumption could land a steelhead. It was easy. Then things began to go wrong. Lake Michigan saw a collapse of it's food base due to invasive species. The fish that ran the river to spawn decreased. The great summer run of the feisty Skamania strain of steelhead began to die off in the lake. Salmon that came into the rivers in the fall arrived already well baked and marinated. Flows that guaranteed good fall fishing fell off due to global warming weather patterns. Spring flows went crazy, and the high water kept people off the river.

I may dislike the environmental collapse of the great lakes ecosystem, but it has seen a decrease in the crowds that were getting a bit ridiculous. Less anglers means a better fishing experience for all. Less fish not only means less anglers, but a more challenging fishery. Instead of "how many did you get?", fly fishermen began asking "did you get one?"
This is my kind of fishing. Not shooting fish in a barrel, but having to work for it.
The interesting thing from my perspective is that the Milwaukee, which was a great fall fishery for steelhead, now fishes better in spring. (Less fish, but a better fishing experience, if you know what I mean) In April of 2007, I accidentally caught my first steelhead on a waker. I was testing a new spey rod and line and had a foam waker in my Hardy bag. Hmmm,. I thought after I landed the fish, (O.K. actually I went leaping down the river in ecstasy!), This is interesting. These April fish are agressive, the flows are way up and the water is clear. Swinging flies was like fishing the Skagit. Big tubeflies and sink tips. Lots of faith and patience. In April 2008, I was fishing a run that usually is nothing but exposed gravel. The flow was just shy of 1,200 CFS. I was wading alone in the river with roaring in my ears, when I connected with a spring fish that instantly tried to get back to Lake Michigan. It was one of the most blistering runs I have ever experienced. I bruised my knuckles. The fish was only around 27". A buck that must have been cruising around looking for females like a pissed off steroid popping linebacker at a nightclub at closing time, it had taken a vicious swipe at my black and purple tube, and hooked itself in the corner of the jaw. Reading Dec Hogans book A Passion for Steelhead that night, a picture of a run on the Skagit looked just like the water that I had hooked that fish in. I wonder if Ed Ward would agree? 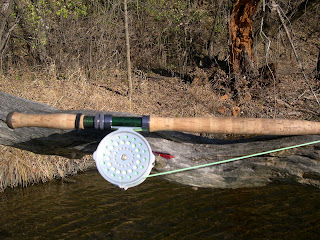 The Milwaukee still fishes well, although never as it has in the past. Perhaps that is a good thing.
It is a river of micro-structure. After fishing out west for several years, I came back and saw the 'Big Milwaukee' differently. It seemed much smaller. Areas that I walked through began to look good, and I hooked fish in new places, especially in flows that local guides "would not even float a kayak in", they thought it was that dangerous. I like to swing big traditional flies on the river if I can get away with it. Something like an Irish shrimp pattern or one of my orange and gold speyflies floats my boat on the Milwaukee. 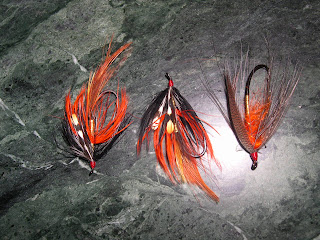 There is so much more history. Who fished it. How. When. etc. Natural history, aquatic history and just plain history. Some of us anglers have even made a bit of history ourselves, not that anyone should take any notice of those crazy guys waving poles in the river.

The Milwaukee would not be on my short list of rivers to fish for steelhead if I ever was given the choice, but it is what we have. Many people bitten by the steelhead bug have much less, and have to drive three or four hours to fish even the Milwaukee.

All urban rivers have hazards. The Milwaukee sports bank walkers who may be after something fishy rather than fish. They hang out in the woods and the parking lots in parks looking for possible 'open air' same sex experiences. We call them "Bush Bunnies." Being yelled at from bridges is common, as well as having rocks thrown at you. Stubbing you toes on construction debris and underwater re-bar adds to the experience. Hooking a shopping cart is a possibility, as is a Milwaukee river grand slam where the angler hooks a diaper, plastic bag, salmon carcass, and the rough fish of your choice. But when it is on, it is on. It can fish beautifully.

I can't cover everything in this post. Thank god for that. I will save some special thoughts and stories for later posts. Like the time that someone called 911 because they thought they saw a body in the river, but it just turned out to be good old Rob... 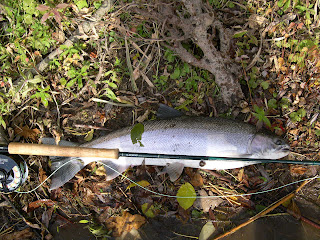