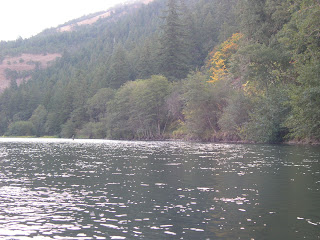 On Memorial day 2003, my mother died. My world became a whirlwind as I took off from work for a month to grieve and dissolve her household as well as managing Dad, planning the funeral and burial, and managing the estate. By July I had lost nearly 20 pounds. I needed a break in a big way. I began to plan a steelhead flyfishing trip to the pacific northwest. The Deschutes was the probable destination. I had plenty of great advise from Little Joe, Brandon, Dave and others. It would be my first long trip and the first time I had ever driven across the country. I began to be scared, and canceled the trip several times, only to come back to the idea and it's need as an escape from grief and duty for a short while.
Meanwhile, I bought a speyrod secondhand from Brandon Luft. A 14' St. Croix Imperial. I added a windcutter 9/10/11 and a Hardy Bougle' and spent a couple hours a week between work and duties teaching myself to speycast. By the time I was ready to leave for the trip, I would have a decent but highly erratic double-spey, and a really clumsy snap-T. That was all. Looking back, I was either really brave, confident, or stupid.; probably the latter.
Finally in talking to Rob Estlund I decided on the Klickitat. It was about the size of the Milwaukee, had decent flow, and according to Little Joe had fished well a couple of years earlier. I thought this would be perfect to cut my western river teeth. Not too big, not too small.

On October 1st, I packed my car with 20 times what I would need for an expedition around the world and drove off into the dawn, west or bust. The scenery was impressive in Wisconsin as usual, and the bluffs of the Mississippi were spectacular, but after the first hundred miles in Minnesota I discovered why they were called the 'great plains'. They were great, as in they lasted forever, and boy oh boy, were they ever plain. When I got to rapid city that night I could hardly walk straight. The badlands were so interesting, but in my dizzy-from-driving state, I almost missed them. The following morning I drove over the wastelands of eastern Wyoming. I was not prepared for the endless climbing hills and lack of any foliage. It felt like another planet. When I got into Montana and passed Bozeman, I began to get into the mountains. I had never seen mountains before and was like a new child getting his first taste of lemonade on a warm day. It was exhilarating. Crossing the continental divide, I descended as fast as I climbed to the Clark's fork plain leading to Missoula. Missoula was simply the most wonderful city I had ever seen. Surrounded by mountains and rivers, and full of interesting stores and people, I wanted to stay forever. Alas, the obsession was calling. The next morning I began to descend the Lolo pass. Somewhere in the Columbia river, steelhead destined for the Klickitat were moving east in their life's journey to spawn and die, while I, after having a death in the family, was journeying west to meet them. Somewhere on the river we would meet, and change our lives forever.

I recorded my thoughts on a mini-cassette recorder during the trip, and as I went west my voice filled with wonder and became both more excited and quieter as if transfixed with awe.

The entire area surrounding the Lochsa river and highway 12 I still consider to be one of the most beautiful places on earth. When I first beheld it that fall of 2003, I braked my car to the side of the road, got out, knelt to the ground, and kissed it. Then I sat for 15 minutes just reflecting. Reflecting and thinking is something easy to do on the Lochsa. There is nothing but you and wilderness...and a single road for a hundred miles. I took some photos, promised myself I would fish here some day, and drove off. I had a long day of driving before me.
At the end of the Lochsa, the Clearwater began, A river wide and intimidating, and destined to be part of my future angling. As I drove further past the foothills of the Rocky Mountains and past Lewiston I looked at the landscape around me as if I were on the moon. Endless brown hills upon hills, upon hills. All colliding and tumbling. Rising on either side of my car the hills hid even more brown hills that would stretch to the Columbia. It began to get really hot. Here was the true high desert. Somehow, I had missed this on my maps. The land should have been marked "Here there are really strange mounds and hills which never seem to end. Do Not Panic!" Finally at 4:30 pm, after been blown away by the massive serenity of the Columbia and Snake rivers, I turned into Washington at drove to the Klickitat.

In our minds we have visions and imaginings of what we think things looked like. The Klickitat looked nothing like 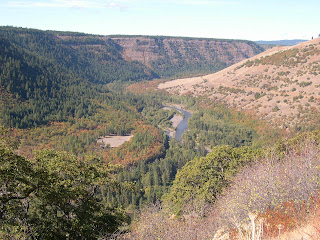 I thought it would. Slightly green with 'glacial milk', it was full of rocks and small rapids. The valley the river created was spectacularly beautiful, especially when contrasted with the deserts east of Mount Adams. Along the banks grew pines and scrub oaks as well as blackberries and poison oak. LOTS of poison oak. The tops of the surrounding canyon rims looked like mountains from the river. I went to the little Chevron station in a town that looked to dominated by meth and poverty, bought my license, found the campground I had researched, and set up my tent just in time for dark. Little did I know that I was camping just 100 feet away from other Wisconsin and former Wisconsin residents guiding in Alaska, and on their annual steelhead camp. 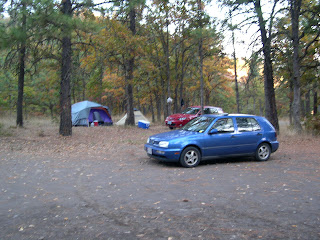 I got up at the normal steelhead hour of 5 am, and started exploring places to fish. The first area I tried was directly downstream from a class 3 rapids. I nearly got swept away and tore a hole in my waders. The next run was a long beach that looked safer from my perspective. For the first three days, I caught nothing at all. Each day began the same; coffee and granola bars at 5 am, and on the river before first light. My casting started out really strong each day, then slowly deteriorated with muscle strain, inexperience, and afternoon winds until I would become frustrated. At the end of the third day I bought a bottle of wine and retired to my tent to exorcise demons. 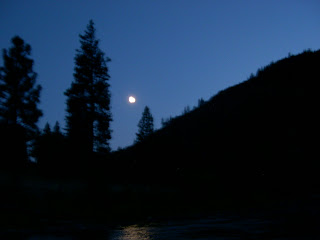 The following morning I hooked my first western steelhead... on the the dreaded dangle. It ran downstream 50 feet, jumped in a shower of silver, and was gone. There were fish in the river!

Driving downstream I spotted another likely looking run which later would know was called the "Honey Hole." I fished it after two really nice guys from Seattle, but hooked nothing. Driving back I spotted what is called the "Vinyard run." It looked awesome, but daunting. The next morning I tried three times to find a route across the fast riffle at the top,only to be turned back by the water. On the forth time I found a route which I would then use for the coming years. Safely across the water, I began working the run, noticing what looked to be a black bear wandering in the distance along the shore. After 15 casts or so, I got that strange feeling one gets when you think someone is behind you. I turned and nearly crapped my pants. The black 'bear' was no less t 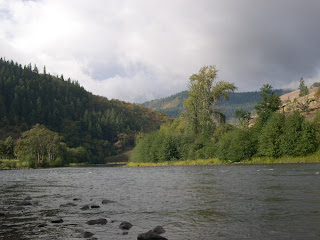 han 20 feet behind me and standing on the bank. Of course, it turned out to be a small black cow, but gave me enough of a start to nearly fill my pants.

Back to the fishing, I continued to work down the run, and was surprised when one of my stupendously awful casts was grabbed by a 35" male. The resulting picture of my thumb and wading boot and half the fish's back did not exactly do justice to the feeling of spiritual accomplishment I bathed in at that moment. I had done it. I had driven across the country alone, waded a new river alone, and caught a wild steelhead alone with a fly I tied myself. It felt like the greatest accomplishment of my life.
I caught five or six other fish in the remaining several days before Rob Estlund met me on the river. We only had one full day to fish together before I had to leave, but there would be plenty enough days in the future. To the side is a picture of Rob with a Klickitat fish. He sure is one fishy bastard. 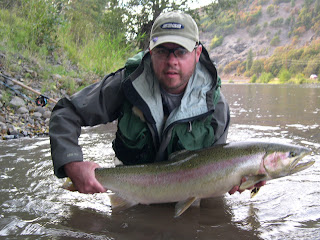 When I returned to Milwaukee people looked at me like I had risen from the dead. Apparently, I looked several years younger and was much calmer . I had a faraway look in my eyes and an ever present smile.
In this journey for steelhead I had not only found fish, I had found myself.
Posted by Erik Helm at 4:56 PM