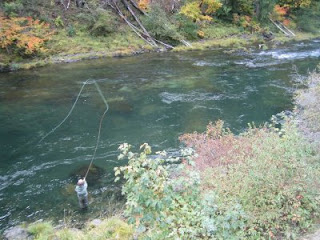 Meet Dave.
Dave has been spey casting and fishing longer than you have been eating solid food.
He's the real deal. A heck of a nice guy with a passion for steelhead. When his name comes up in a conversation the whole room goes quiet. His casting is like watching poetry in motion, or listening to a well played cello suite of Bach. No kidding. Nobody in this area has been doing this kind of thing longer than him. He has fished most of the great steelhead rivers in North America, is on the cover of one of John Shewey's guidebooks, has been featured on the covers of magazines, photos in the old Art of Angling Journal, and spotted in the mists of the Sheboygan on a cold fall morning.
When I am out west on the great steelhead rivers, nobody knows me, but just mention Wisconsin and they say "Do you know Dave Pinczkowski?"

No man deserves that kind of tribute more.
Here is to you Davey....
Posted by Erik Helm at 7:06 PM