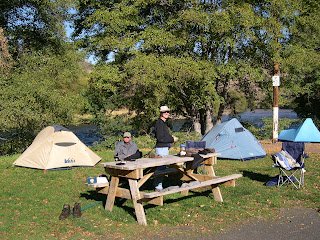 Real steelhead bums lead romantic lives. Lives spent in pristine temples of river and wilderness hooking fish only a day from the sea, and then eating barbecued steaks around the campfire and sipping single-malt. Lives showing wealthy anglers how to catch fish, and getting tipped to boot. A life of being payed to play.
The romantic vision is only an illusion Dorothy. Pay no attention to the man behind the curtain.
Sure the wilderness settings are real, and these guys do catch a lot of fish, but reality intrudes with all sorts of draw-backs.
First of all, these guys just want to fish. In order to pay the bills even of a frugal and meager existence, they are forced to guide clients. Guiding is like being in a room full of the most beautiful women in the world, and being forbidden any contact whatsoever while trying to teach an uncooperative autistic child advanced symbolic logic.
ie; You rarely get to fish, and you have to watch the client that does flail away and blow opportunity after opportunity, which is as he will tell you, all your fault.
Dealing with this involves deep philosophical understanding, Zen, and booze. Mostly booze.
The photograph the guides have on their brochure is staged. If it wasn't you would be on the phone after you saw it, reporting a cross between a filthy mountain-man, and a dumpster diver in waders. My friend little Joe comes back from Alaska where he spends a third of the year guiding, sporting an enormous black beard half his size. (He looks good in it though.)
Instead of steaks, the real food often consists of canned alpo washed down with discounted and expired PBR tall-boys. Then it is off to sleep on a deflated air-mattress in a tent, or if lucky, in a pick-up camper. Get up the next morning with your perpetual hangover, drink coffee with an oily sheen on top that tastes like cat pee, put all your remaining earthly funds in your gas tank, and then pick up your client for the day; a rich millionaire who thinks he is gods gift to fly fishing, argues with you about everything, and can't cast past his boots. Miss lunch for the day, and instead discover a dubious squished twinky in your wading jacket. Eat it with relish. Dodge the creditors until you can get back to your small one room apartment above the town dive-bar filled with meth-heads, and find out your girlfriend has left you for good and taken your dog.
When the fish are not running the rivers you can tend bar or work at a flyshop for minimum wage.
I have been around enough steelhead camps to see all this for myself. Many of my angling chums are guides. There is a large contingent of ex-pat Wisconsinites guiding and fishing chrome in the Pacific Northwest.
Now it is not as bad as my tongue in cheek descriptions, but there is a reason that so many of the guides I know are now former guides. The life will wear you out. It is fun to live like this for a couple of weeks a year, but not for good.

I have had some memorable experiences on steelhead trips. The incredibly bad breakfast burritos at the Klickitat Traders definitely stand out. All the rattlesnakes and poison oak I have dodged. The epic food poisoning I got at the Rainbow tavern in Maupin on the Deschutes. Limping around on twisted knees from wading accidents. Entering a restaurant for that much needed meal of real food and seeing all the diners recoil in horror as you realize that sometime last week you ceased to be able to smell your B.O anymore. Visiting the toilet in the middle of the night when that blue plate special of enchiladas wants desperately to come out as a number 2, and finding that the retarded caretaker Lester has locked the door in fear of "Them highway Injins." Waking up at 5:00 in the morning when the temperature outside is 35 degrees and you have to leave the snug warmth of your sleeping bag, put on damp and smelly waders, and make it down to the run you wanted to fish, just to discover two guys from California had the same idea, and got up earlier. Camping next to a group of young drunken metal heads who party all night and don't get up until the evening bite is upon them. Discovering that in your sleep deprived mode and complete darkness of dawn, you accidentally used Preparation H instead of toothpaste, and what's worse, didn't notice until you saw the label afterwards.
Having all your underwear mysteriously stolen from your tent along with your luggage by desperate tweakers, and having to spend the rest of the trip in Wal-Mart clothing.