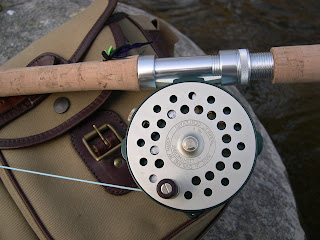 I enjoy casting a dry flyline and fishing small featherwings or bombers more than any other spey swinging method. It is not that I dislike sinktip fishing, it is just that sometimes it gets to seem a lot like work or tossing lures. I do a lot of it because I have to. Casting and swinging a dry line is elegant. It is trusting that the fish is hot and eager and it will rise for your artful offering. It is traditional as well. I have spent the majority of my western trips swinging flies on the Columbia and Snake tributaries with a dry line. There is also something about a line unencumbered by weight which transfers every event and nuance that happens to your fly directly to your hand, mind, and soul. It has the added benefit of really minimizing the amount of flies you lose.
If I had to choose a single method of catching steelhead, it would be with a floating line and a bomber. On a run in a Snake river tributary I got slammed by a fish on a bomber. It wasted out line into the backing making my poor Marquis Salmon #2 scream for dear life. It roiled up the water like crazy as it ran. Rob, who was fishing behind me watched the whole thing. When I landed it, it turned out to be what we call a 'snit'. It was only 18 or 19 inches long! What the heck?! Rob looked at me as I held up the fish and said "I can't believe that little thing did all that". The little fish in it's exuberance to eat the bomber had been pumped up enough to fight like a twenty pounder. That is how fish often hit bombers; they not only eat them, they set out to annihilate them.
It takes a lot of confidence to fish with bombers. For a long time I really wanted to, but I also wanted to catch fish, and I thought that in most situations (correctly), that I had better odds with a wet. Then came a day on the same river when I was fishing a purple bedsprings spey on a size 2 hook, and watched as it actually waked through the water. Hmm.... So, A fish would have to move just as far for the spey fly as it would for the bomber. The bomber put up a better commotion and wake and was more visible, so why not? Of course, there are times of day and water conditions when fishing a surface waker is nothing but down-time, but sometimes it can work in situations that are surprising. 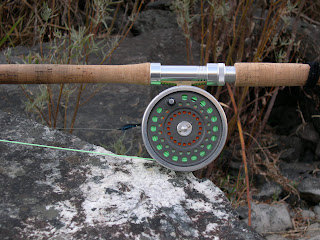